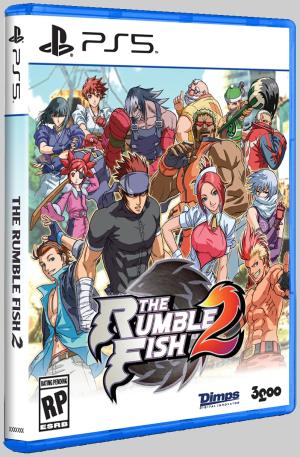 The Rumble Fish is a 2D fighting game. The arcade version was developed in 2004. The arcade version of The Rumble Fish 2 came out in 2005, introducing new game mechanics and characters. It gained popularity with its sleek 2D visuals powered by S.M.A. (Smooth Model Animation), fascinating characters and strategic gameplay using 2 types of gauges. The game series has a cult following and is still played in tournaments. Worth noting the series has never been released outside of Japan. This will also be the first time The Rumble Fish 2 makes the move outside of the arcade platform. The Rumble Fish Story: At the close of the 20th century... A large-scale natural disaster struck the eastern area of a certain country. The disaster wiped out the financial sector and toppled high-rise buildings over a wide area, even as far as the main functions of the capital. This resulted in the loss of a staggering 158,000 lives. At the dawn of the 21st century... Conglomerate PROBE-NEXUS, commonly known as Probe, begins reconstruction efforts in the eastern area of said country. Probe relocates its own base of operations to the ruined sector and builds a massive city run by the corporation. Lavished with colossal capital and cutting-edge technology, the modern-day Babylon is made up of skyscrapers that put the old high-rises to shame, the biggest shopping mall in the world, and recreational facilities one might mistake for a theme park. This was the dazzling birth of a symbol for the new century. It became the most essential place on the planet and was christened Zone Prime. Features: - Relive the arcade days! A legendary fighting game revived with various new features!: The renowned fighting game that excited arcade enthusiasts with its two meters, advanced tactics and smooth visuals, is now available for consoles with many bonus features! - Polished battle system by a celebrated fighting game studio: With diverse and advanced game mechanics including two meters for offense & defense, users are able to enjoy complex and challenging game play! - Seamless rendering via S.M.A. (Smooth Model Animation): Characters move very smoothly with high-quality textures due in part to a rendering method developed based on articulated technology - New features tailored for modern console game environments: Optimized for the modern environment, such as 16:9 widescreen support, an online battle mode (with rollback system support), training mode with AI, a gallery mode, and more!