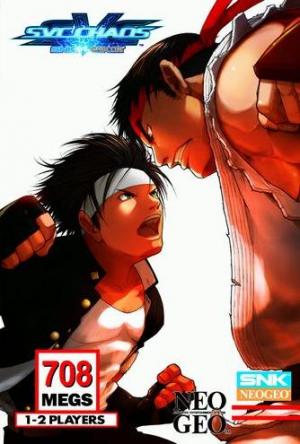 The gameplay is based on the KOF series (particularly The King of Fighters 2002), with the same four button configuration and many of the same techniques. However, the game does not use the Team Battle format, but follows the traditional round-based one-on-one format. Each match begins with a dialogue exchange between the player's character and the opponent. One new technique introduced in the game is the Front Grand Step, which allows the player to leap towards the opponent and cancel into a basic attack. The player can perform this technique while guarding from an opponent's attack, which will consume one Power Gauge level. The game uses a different type of Power Gauge known as the Groove Power Gauge System, which has three levels. The Groove gauge fills as the player lands attacks against the opponents or guard attacks. When the gauge fills to Lv. 1 or Lv. 2, the player can perform Super Special Moves, a Guard Cancel Attack or a Guard Cancel Front Step maneuver. When the gauge is full, its reaches MAXIMUM level and a MAX Activation occurs. During MAX Activation, the gauge will change into a timer and the player gains the ability to cancel any of their moves anytime (in addition to Super Special Moves and Guard Cancels). Once the timer runs out, the gauge returns to Lv. 2. In addition to the regular Super Special Move, each character also has an Exceed move which can only be performed once when the player's life is less than half.