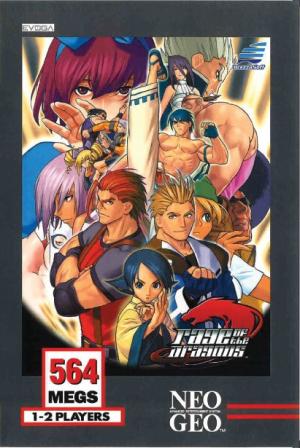 Rage of the Dragons

Rage of the Dragons is a fighting game based on a story of dragon worshipping and the threatening rise of the evil Black Dragon cult. To stop the rich, powerful, and young man possessed by the Black Dragon, the old master of the Sho Setzu Ken form leaves his dojo for a confrontation. Unfortunately, he's old and weak, and he dies before getting there. His daughter Lynn (White Dragon), pupils Jimmy (Red Dragon) and Billy (Blue Dragon), and many others are swept up into the inevitable conflict. Similar to games like Mortal Combat and Killer Instinct, Rage of the Dragons allows control of 14 different characters each with different moves and powers. The NEO GEO Advanced Entertainment System gets a rare new game with this 2002 release.