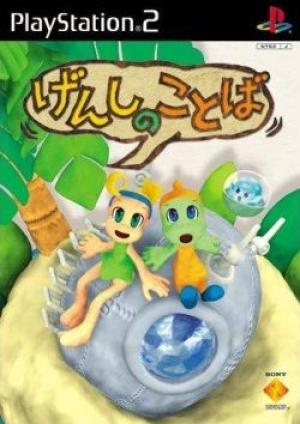 Genshi no Kotoba is an adventure game that follows the story of and alien that when is going in a trip with a group of scientics of his planet when he is alone in the ship, falls asleep and suddenly he wakes up to see that his ship is going to crash in a a fire star, so in the last moment he avoid it just to crash in a water planet, so now he got to repair his ship and return home. To help him in his quest specially in the conversations with the natives of the island he will have the help of a little flying alien that will try to teach him with the translations. The first conversation of the game is with a little girl that got hurt in the space ship crashing, after helping her the next step will be in the native's tribe. In the game the player can talk to the people of the island using emoticons, the basic of the gameplay is to combine into different emoticons to advance in the conversations with the characters. The game is divided into 7 chapters.