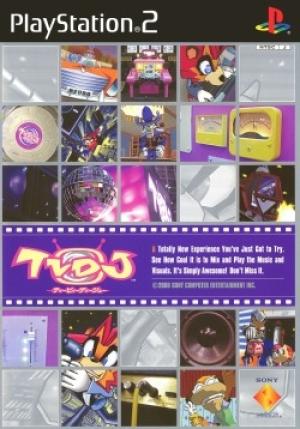 Originally known as Be On Edge, TVDJ is an action/rhythm game that was only released in Japan by SCEI. An impressive early PS2 game, it has cel-shaded graphics and is fully voice acted. Unfortunately, the game is only a a handful of short 5-minute stages that end up feeling more like a mini-game. You play as an unnamed television show producer/DJ that has been commissioned by the BBB Television Company to raise their program ratings and get more households to watch their shows. There are several protagonists in the game however, you never directly control them, only the segments of television they will appear in. The game's stages are varying; you'll see spy dramas, infomercials, weddings, baseball games, wild west shoot-outs, and more. The characters in TVDJ are cel-shaded animals that live in Cartoon Town. They are all quite funny and look great graphically, but it's unfortunate that the game is so short that it lacks much character development. The gameplay is simple - fill up the "production meter" with eight segments of your television show in order to get higher ratings. Each of the face buttons has a different value of segments that can be placed into the "production meter". Once the meter is properly full and you have enough ratings to pass the stage, the stage will complete and you'll be tasked to do another production set. If you make a mistake, the stage will replay but with a decrease in visual quality that becomes worse with each mistake. Upon beating a stage you will be treated to "ON AIR TIME" which will show you the television show that you produced in its entirety. The game's feature set includes four different television shows, multiple difficulty levels, and a simple four-button control scheme. The Director's Cut Mode allows players to play through the game again with a higher difficulty.