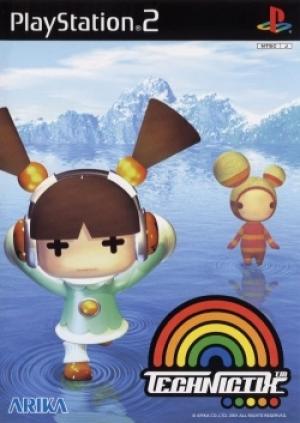 Technictix is a music based game released in 2001. It's a rather strange musical game, as opposed to the ones released today, and it required you to control a character on screen and moving it around while keeping the melody via the use of a ring system. It was composed by four former Arika employees, Shinji Hosoe, Ayako Saso, Takayuki Aihara, and Yasuhisa Watanabe, and their two associates, Yosuke Yasui and Hiroto Saito, in a variety of styles. Technictix is being described as a rhythm-action game. The game features techno music as its backing, which apparently causes ripples in the on-screen water. You must move the in-game characters, Knitty and Rain to the ripples and tap buttons in line with the music. A rather special title in which you must link up waves on the water's surface in time to the techno beat. Sounds strange but its very compelling with a bunch of bizarre characters and great use of colour. Can be played two player using the same controller. Game Modes: - Performance - Free - Tutorial