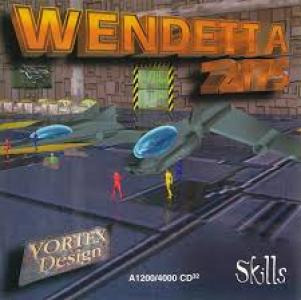 In the year 2175, Earth has finally come to peace. However, a new threat arises: the TERRONs, the cruelest race in the universe, attacks Earth's colonies in the solar system with giant vacuum cleaners. Some people on Earth managed to hide underground, in a technologically advanced factory. Two of them volunteered to fight the TERRONs with the help of spaceships that were built here. Wendetta 2175 is a shoot 'em up game for one or two players. The game consists of horizontally scrolling levels and levels where the player controls the ship from behind in a pseudo-3D perspective. Powerups can be collected to upgrade the ship's weapon systems. The ultimate goal is to defeat the boss at the end of each of the seven stages to progress further in the game.