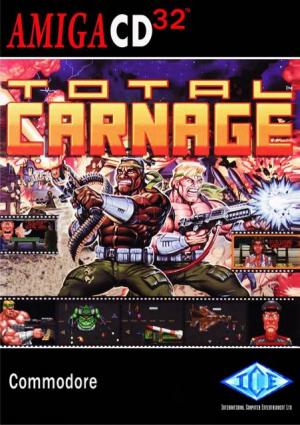 The war of 1999 left the country of Kookistan in shambles. Naturally, a dictator named General Akhboob took control of the beleagured nation and began creating an army of radioactive mutants. With a virtually impenetrable stronghold, a bunch of hostages, and a legion of mutants under his command, the evil despot will stop at nothing but world domination. Only two men have the courage and idealistic naivete to take on Akhboob and his forces: Captain Carnage and Major Mayhem, also known as the Doomsday Squad. As Captain Carnage or Major Mayhem, it is up to you or you and a friend (in simultaneous action) to rescue the hostages while shooting hundreds of mutants bent on your destruction. As you walk and run forward, backward, left, right, and diagonally through 20 battlezones of nonstop action, you'll always have your machine gun by your side. Additional weapons which you can find along the way include grenade launchers, rocket launchers, plasma machine guns, flame throwers, spray-fire rifles, defensive blades, and an assortment of bombs.