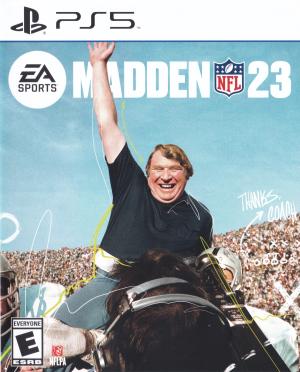 The all-new FieldSENSE Gameplay System in Madden NFL 23 provides the foundation for consistent, ultra-realistic gameplay and equips players with more control at every position. Features: NEW GAMEPLAY MECHANICS Only on Playstation 5 and Xbox Series X|S in Madden NFL 23, an all-new suite of user-friendly gameplay control mechanics lets you affect every play no matter where you are on the field in ways never before possible. 360 Cuts Break off more big plays Skill-Based Passing Drop dimes all over the field Hit Everything Wreak hit-stick havoc WR vs DB Battles Win the battle off the line Franchise Call the shots from the front office Face of the Franchise: The League Play your way into the history books Madden Ultimate Team Simplified team-building, convenient competition The Yard Become the world’s greatest in this tricked-out, backyard-inspired 6v6 gameplay set in fantastical locations around the globe. Superstar KO Squad up and feel like an NFL superstar in Madden NFL 23’s fast co-op eliminator mode where Superstar X-Factor abilities are always on. Play With Friends Play Now Compete in head-to-head online and offline games (single and multiplayer) or single player offline against the CPU.