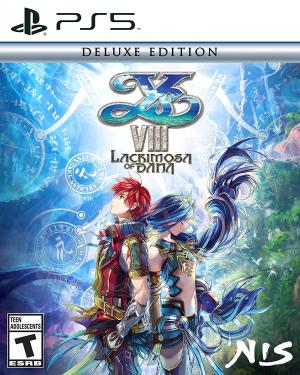 Ys returns with an exciting adventure for the first time on PS5™! Adol awakens shipwrecked and stranded on a cursed island. There, he and the other shipwrecked passengers he rescues form a village to challenge fearsome beasts and mysterious ruins on an isolated island. Amidst this, Adol begins to dream of a mysterious blue-haired maiden living in a curiously advanced civilization. Join Adol as he unravels the enigma of the cursed isle and the blue-haired maiden Dana in Ys VIII: Lacrimosa of DANA! Features: Deluxe Edition includes - Ys VIII: Lacrimosa of DANA GAME, CD Soundtrack and Softcover Art Book+ Blazing Fast Action - Quickly switch between your party members during high-octane combat to utilize their unique abilities and fend off the fearsome beasts of Seiren. Day ‘n Night - Two souls, two sides of a coin! Your actions as the mysterious Dana may impact Adol's world... A World of Exploration - Tons of side quests scattered throughout the isle keep you engaged for hours including fishing, trials, and more! A Legend Reborn - Based on the original PS4™ release, this iteration of Ys will include all previously released cosmetic DLC from the PS4™ and PS Vita versions.